by Sylla Sheppard-Hanger | Dec 18, 2013 | Memoirs Of a Vintage Aromatherapist

In February of 1982  I married my husband, O.V. on Valentines day and the same month bought the salon business I had worked at for a few years. I renamed it Rumors, in honor of Fleetwood Mac and Stevie Nicks, my obsession at the time. Originally I sold my collection of vintage clothes I had worn and accumulated for years called “Sylla’s Fancy”. (I was later known for this kind of attire, dripping lace, antique slips for dresses, layers of slips showing some lace up boots. I loved finding something to add to my style of dressing. Once my friend Michael’s son now adult told me that when small “I thought you were the goddess or the good fairy with your dresses”….so cute.

Pretty soon I also sold my first aromatherapy products and essential oils. Eventually my line was called “Rumors Aromatics” with oils, blends, natural perfumes, with Aveda products on the side. I created a scent bar where my clients could to sit and play with oils, to find the right scent or just smell and look. 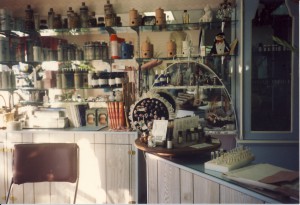 Being the first in Tampa offering aromatherapy, I had a bit of publicity with many articles in the papers, talks on local TV news, and newspaper interviews and articles. Early on my clients thought I was saying I did “roman therapy,” wondering what the heck that might be. Now of course they know more than most people thanks to their early education in what was then a little known therapy. 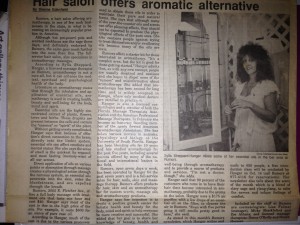 My signature salon scent became rosemary and geranium (2:1) blend. Clients would just come and sit and relax as they passed by, others would know they had been there due to their smiles and subtle scents. Students from nearby University of South Florida would come get a “study blend snifie” (cotton ball of basil and rosemary), then a fresh one for exams. I made custom blends for massages, giving clients the remainder to “bring them back” to my table when they used it. Aromatics, aromatherapy massage, and natural facials became the rage as we became a community gathering place for looking and feeling good. I did consults and helped a lot of people find essential oils. My first blends included my own personal scent with a patchouli base that has changed yet remained the same they say over the years; a blend for protection during meditation of 33 essential oils, an earthy grounding blend with vetiver, patchouli, sandalwood; and most asked for,  our famous rosemary and rose geranium house blend.

After half a decade of playing around with oils on my own, I wanted to expand my offerings a share the knowledge I had collected and many were requesting classes and courses. My first classes were live but eventually I created the Aromatherapy Practitioner Correspondence Course for mail order; and in 1989 the Atlantic Institute of Aromatherapy was created as my official educational arm, separate from the oils. A few years later, after ten years open I closed my salon, Rumors, and I quit selling oils as I could not do both teaching and selling as it became clear about this time that it is unethical (illegal if medical?)to make claims and sell product. and I had seen enough so called educational classes really there to sell product in the hair industry. So I moved my office and salon/treatment room to my home so I could focus on devoting myself to the collection of knowledge and experience within this field that had become my passion. I remain here today, working out of my home, seeing clients and working in my yarden…